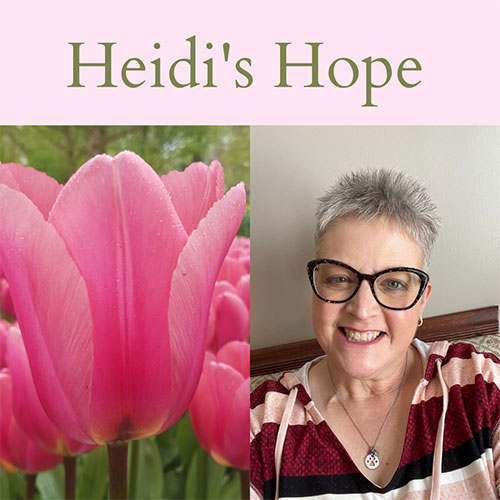 Just weeks before her fiftieth birthday, Heidi Punke Brown thought she was in great shape. “I’d just lost a ton of weight and really was at my most fit in a couple decades,” she said. She was even training for a 10k. But she found a lump in her breast, and soon learned she had stage IV metastatic breast cancer.

How could that be when she’d had a mammogram just nine months earlier?

It turned out Heidi is one of millions of women with dense breast tissue. In her case, it hid the cancer cells that more high-powered testing could have detected. “I should have been getting additional tests,” she said, but she didn’t know.

After Heidi discovered that lump back in 2019, a routine mammogram showed nothing of concern. However, a subsequent diagnostic mammogram led to an ultrasound and the devastating news that she not only had breast cancer, but it had spread to her liver, spine, and adrenal gland. Three years later, she has also dealt with 13 brain tumors as well.

Now, Heidi’s on a mission to ensure no one else ends up in the same situation.

“I can’t change my story, but maybe I can change someone else’s,” she said.

From her home in Elliott, a small farming community in central Illinois, Heidi began researching online and discovered My Density Matters. Motivated by her own experience and the work of My Density Matters, Heidi began reaching out to family and friends, even approaching strangers, and including notes about dense breasts when she pays her bills by mail. Her message is simple and straightforward: Everyone should know their breast density and talk to their doctor about the appropriate testing.

Heidi didn’t reserve her story for women. She told men too, including Greg Niewold.  The two talked regularly as part of their work; she served as comptroller for a grain elevator company, he sat on the Board of Directors.

Touched by Heidi’s experience, Greg offered to help spread the word. A former high school agriculture and industrial tech teacher, he wanted to educate. “Breast cancer affects men too, obviously at a much lesser rate, but we have wives, daughters, and mothers. And when someone gets cancer, it affects the whole family,” he said.

Greg is also a farmer and runs a family business that manufactures augers, a tool that bores holes in the ground for planting. Bringing his skills and passions together in collaboration with Heidi and My Density Matters, Greg is selling the Heidi’s Hope box to help empower more women to find out their breast density and take action accordingly. The box contains a pink auger, 10 tulip bulbs, literature about breast density, and a letter from Heidi:

Shortly after my diagnosis I was given a Power Planter by my friend, Greg Niewold, owner of Power Planter. My husband and I planted a hundred bulbs that fall as our way of showing HOPE. I could look at the snowy frozen ground during the winter and think of the gorgeous flowers that would magically appear in spring. The same way, I can keep living with the HOPE that I have more time with my husband and our three children.

“I would like to think it’s pretty impactful when you’ve got just a random guy in central Illinois who runs a manufacturing business, and all of a sudden he’s bringing awareness to breast cancer,” Greg said, “My hope is simple. I just want to raise awareness.”

“All I want is for no one else to find out they have stage IV cancer when they’ve been dutifully getting their mammograms over the years,” said Heidi, who calls herself a metastatic breast cancer thriver. “I don’t want that to happen to anybody else.”